This is how Glenn Lowry, Director of New York’s Museum of Modern Art (MoMA), described his institution at a recent talk at the Australian Centre for the Moving Image (ACMI). 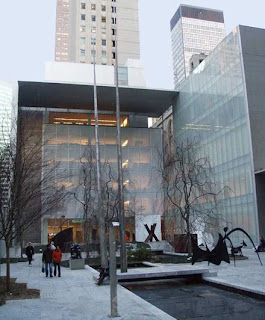 ums in the 21st Century, Lowry presents some interesting ideas about what it means to be a modern art museum. That’s where the ‘unstable bit’ comes in. MoMA considers itself as an organisation under perpetual change: every 10-12 years or so, the building undergoes some major reconstruction, frequently in parallel with a total reconception of how the museum should operate.

To cease doing this, Lowry contends, would mean to cease being a Modern Art museum and begin being something else. They have to continually change and adapt in response to changes in the art that they collect, display and interpret.

One example: at some point in the past, the MoMA building was laid out as a linear sequence of joining galleries, like beads on a string. This works great for nice neat linear stories showing chronological developments in art history. But modern art often doesn’t fall very neatly into chronological or stylistic boxes, so the string of linear galleries was an uncomfortable fit. The current layout is more open, apparently allowing more organic juxtaposition of ideas and narratives.

There are also practical reasons to make radical changes to the building – some of the art that MoMA is procuring simply can’t fit in the current building, either due to scale or gallery configurations. But this doesn’t stop MoMA collecting what it thinks is important – it changes its building to accommodate (I marvel at an organisation that has the resources to do this!).

Lowry also made some interesting observations about how they have been changing the way that audiences interact with the art and each other in their spaces. He mentioned the MoMA’s PS1 site, an exhibitions and events space which attracts a far more youthful and diverse audience than the average MoMA audience. In fact, in recent years the overall audience demographic has changed from being 55+ and predominantly female, to around 40 with a nearly even gender split.

Yet another reason why I have to try and get to New York!

With a background in exhibition development and visitor experience research, I’m now working on being a thoughtful leader and contributor to the Museum sector.